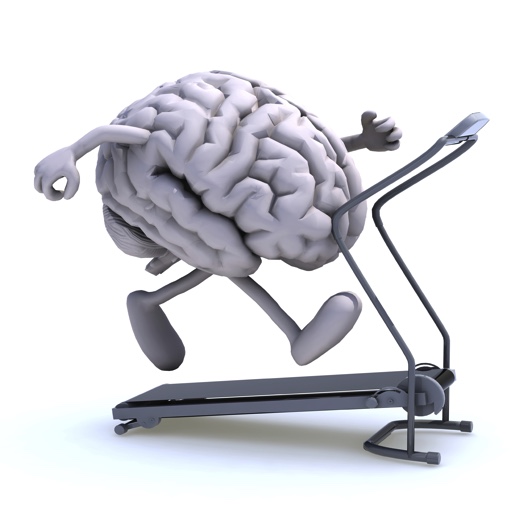 “Spend 5-10 minutes lying down, make yourself comfortable, and keep your eyes open. Be still. Don’t think of anything specific”

These are the typical instructions gives to participants in a ‘resting state’. This is the study of brain activity with neuroimaging while the subject is literally told to do nothing.  This approach is very popular in our field… but why is it worth putting such effort into understanding a brain that isn’t doing anything? But in reality, the brain is never doing nothing. And studying the ongoing spontaneous activity that it produces can provide key insights to how the brain is organised.

Traditionally, a technique called functional Magnetic Resonance Imaging (fMRI) is used to study the resting brain. This uses changes in metabolism to chart brain activity. It turns out that the patterns of activity across the brain are not random, but are highly consistent across many studies. Some brain areas – in some cases anatomically distant from one another – have very similar patterns of activity to each other. These are referred to as resting state networks (RSNs).

A problem with this imaging method is that it is slow. It measures changes in metabolism in the order of seconds, even though electrical brain activity really occurs on a millisecond scale.  A landmark paper by Baker et al. (2014) instead used an electrophysiological technique, MEG, which can capture this incredibly rapid brain activity. They combined this technique with a statistical model, called a Hidden Markov Model (HMM).

They showed that contrary to previous thinking, these networks are not stable and consistent over time. Even when they brain is at rest they change in a rapid and dynamic way – the resting brain is never actually resting.

For more details of how they did – read on:

What is a Hidden Markov Model (HMM)?

A model, such HMM, is a representation of reality, built around several predictions based on elementary observations and a set of rules which aim to find the best solution of the problem. Let’s think about Santa Claus: he has to carry a present to all the nice kids. The problem is that he doesn’t know how to fill the sack with the toys, which has limited capacity. The input in this case will be the toys which have a certain weight and volume. Santa could try lots of solutions, until he finds this optimal configuration of toys. In essence, he is using a ‘stochastic model’ that tries multiple solutions. Santa knows the inputs, and can see how varying this results in a more optimal solution.

An HMM is also a stochastic model.  But this time the input is hidden, that is, we cannot observe it. These are the brain states that produce these network patterns. Instead, the output – the brain recordings – is visible. To better understand how the model works, imagine a prisoner is locked in a windowless cell for a long time. They want to know about the weather outside.  The only source of information is if the guard in front of his cell is carrying an umbrella (🌂) or not (x🌂x). In this case the states are the weather: sunny (☀), cloudy (☁), or rainy (☔), and they are hidden. The observation is the presence or absence of an umbrella. Imagine now that after a few days the prisoner has recorded a sequence of observations so he can turn to science and use HMMs to predict what the weather is like. The prisoner needs to know just 3 things to set up the model on the basis of their observation:

What is the probability that the next day will be ☔ given that the guard is carrying an umbrella 🌂? After many days of observations, let’s say 50, what is the probability that day 51 will be ☀? In this case the calculation is really hard. The prisoner needs to integrate the various sources of information in order to establish the most likely weather condition on the following day – there is actually an algorithm for doing this, it is called a ‘Viterbi algorithm’. 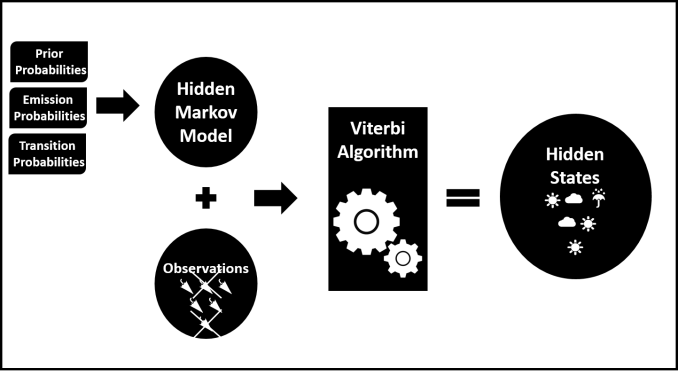 How HMM is used in resting state paradigm

Using HMMs, Baker et al. (2014) identified 8 different brain states that match the networks typically found using fMRI. More importantly, they revealed that the transitions between the different RSNs are much faster than previously suggested. Because they used MEG and not fMRI, it was possible to calculate when a state is active or not, that is, the temporal characteristics of the states.

The authors additionally mapped where the state was active. They used the temporal information of the states to identify only the neural activity that is unique in each state. Therefore, they combined this information with the neuronal activity localization to build the networks maps.  This procedure identifies the brain areas associated with each state.

This study provides evidence that within-network functional connectivity is sustained by temporal dynamics that fluctuate from 200-400 ms. These dynamics are generated by brain states that match the classic RSNs, but which are constituted in a much more dynamic way than previously thought. The fact that each state remains active for only 100-200 ms, suggests that these brain states are underpinned by fast and transient mechanisms. This is important, because it has previously been unclear how these so called ‘resting’ networks are related to rapid psychological processes. This new approach provides an important step in bridging this gap. At last we have a method capable of exploring these networks on a time-scale that allows us to explore how they meaningfully support cognition.

One thought on “The resting brain… that never rests”

Follow Forging connections between neuroscience, cognition and the wider world. on WordPress.com